If I had to name my favorite garment for reenactment use, the competition between a good hood and a straw hat would be a fierce one. I made this one using fabric I bought at a medieval festival last summer; plant dyed hand woven wool. For thread I found some leftover buttonhole-silk I had used on a dress I made years ago. 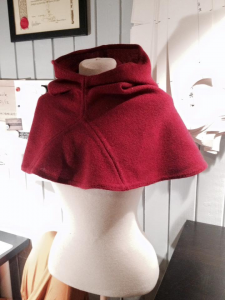 The pattern was made based on D10597 from the Herjolfsnes finds, or Herjolfsnes no. 66. I was lucky enough to have a comrade-in-hoods over for a medieval skiing-event this winter, and also copied the pattern from his hood, which gave me a good reference for size. I wanted to use this hood for 1308 -events, and therefor chose to modify the original Herjolfsnes liripipe. Other than that the Herjolfsnes pattern was good as gold, and my hood is cut on the straight grain same as the original. 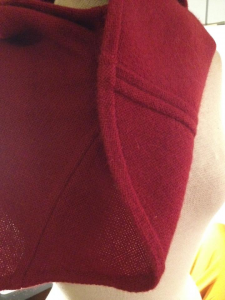 Because the fabric was loosely woven (and quite expensive, as all hand woven fabrics should be!) I chose to double-fold the seams, with two rows of stab stitching at the edge.

The Maciejowski Bible served an inspiration and gave visual guidance when I was modifying the liripipe. Here you see Ruth and a servant accompanying her during the harvesting of the wheat. 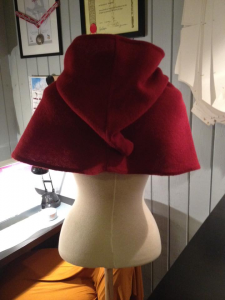 I love how the liripipe makes a little tail! Before sewing it I had (for once) actually tried to make a “master plan” for my projects this summer; hood, purse, bag and cloak. Only the red hood came out as planned, but I’ll throw in the sketches for good measure!

For anyone interested I recommend the book “Medieval Garments Reconstructed” with enthusiastic joy! It has inspired plans for many more “hoodlum” -projects in the future 🙂 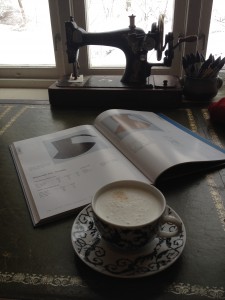 Some projects seem to last forever.
Last summer (2015) finally started on my golden silk brocade gown, and it has taken me a year to finish and publish the draft for this blog post: but here it is at last. The gown is very highly inspired by the Uppsala gown, also known as Queen Margrete’s golden gown. I wanted to write a post about what sources I’ve used and some considerations I’ve made in my adaptation. I have made several massive alterations, but the end result is very much based on my interpretation of the original gown.

The Original:
The original dress is carbon dated to 1403-1439, although scholars and nerds alike disagree about for what occasion it was used. Maybe it was used by Queen Margrete as a child bride at 10 years old, for a statue at her funeral, or used by someone else entirely.. The gown is quite probably modified from it original size, or at least that would explain some of the weirder aspects of how the pieces are put together. For more information about the gown, the fabric and about Queen Margrete: check out the books and articles listed further down. I did send e-mails to the authors of blogs listed, but unfortunately most of them have been inactive for years.

There are many theories about the hows and why’s and when’s, and I looked at all the source material and pictures I could find to form my concept of this dress. First off is the fabric: I’d like to be able to buy actual gold fabric but alas: I bought a farm instead. The fabric I used was not even a proper reconstruction of a medieval fabric, but a modern silk fabric that in my opinion was similar enough to pass. Off course I think the fabric is more than beautiful enough in it’s own right, and I do think that stiff quality it has is somewhat similar to the original golden fabric. 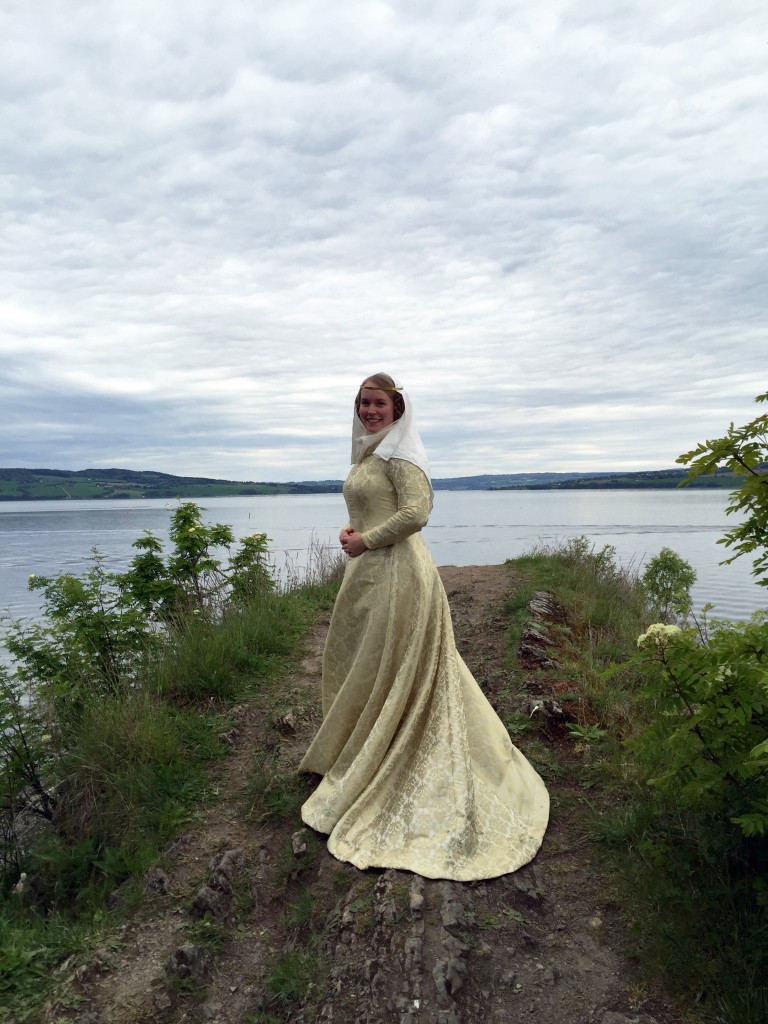 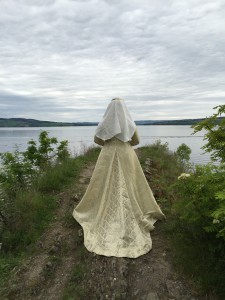 The silk brocade fabric is bought locally in Oslo, I suspect it’s the kind of fabric used for grooms coats in Pakistan. The quality is really rare to find here, because it has that stiff texture that most modern silk fabrics lack. It’s been laying in my sewing room for the last three years and I guess it’s mostly fear of ruining it that has kept me from actually making the dress. I had five meters, width 75 cm (Original fabric width 60 cm) – and used most of it, only saving a little so that I can re-do the sleeves sometime in the future when I figure it out. 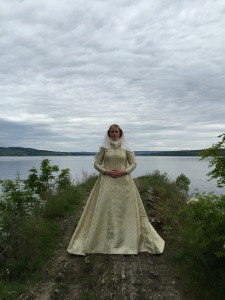 The original sleeves are mostly interpreted as Grand Aissette sleeves, but I couldn’t get my head around how the fit was suppose to be based on the existing pieces. My solution for this was making an ad hoc mix of what was left of the Uppsala sleeves and the existing complete grand assiettes sleeves on Charles De Blois’ arming jacket (1360).

My gown is lined with linen in the bodice in accordance with the Uppsala gown. As you can see in the pictures I’ve lined the bottom edge also, with a 10 cm strip of linen. I am not really happy with this way of doing it, so I will hopefully find a better (and more accurate) solution before next summer. I did this for wear and tear: because I’ll be using the gown horseback riding, in outdoor living history setting and generally be walking all over places silk gowns aren’t suppose to go! It is made for parades and shows and late night banquets: but not so costly I can not use it out and about. Where there is reenactment, there is usually mud, horse poop and dust as well, and I think it would be a waste to not feel like I could wear it whenever. 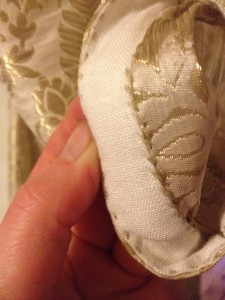 I lined the sleeve edges with a strip of the same linen I used for lining the bodice, and used natural dyed linen thread for sewing. I did that based on the detailed photos of the original seam you can see below. As no sleeve edges were preserved this is more or less a pure guess.

All pieces were cut on the straight fabric grain, except the pieces used in the sleeve gussets. I had to turn the two gores in the very back upside-down because I didn’t really have enough fabric for the skirt width: so you can see the shine of the fabric doesn’t quite match in the back. A compromise, but it works. 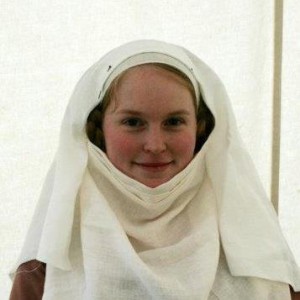 For my headdress I chose to use this statue of a young noblewoman as a starting point and inspiration. I’m sorry to say I don’t know where it’s from, so if anyone know please tell me! As the pictures clearly show; I have a rather hard time making veils stay where they are meant to, but I have worked on my veiling technique since 🙂

Pauline Loven’s blog Period Wardrobe has a great post with pictures from the exhibits at Uppsala and Stockholm:
https://periodwardrobe.wordpress.com/2010/09/13/queen-margarets-gold-dress-early-15th-c/

A very interesting take on the dress and details of stitch types used.
http://www.forest.gen.nz/Medieval/articles/garments/Margrethe/Margrethe.html

For great closeups of the fabric by Cynthia Virtue :
http://www.virtue.to/articles/margaret.html

Be sure to check out this article about the reconstruction made by Duran Textiles: http://www.durantextiles.com/newsletter/documents/news_3be_10.asp

And also this one from Duran Textiles, about (the most awesome) Queen Margrete:
http://www.durantextiles.com/newsletter/documents/news_3ce_10.asp