I finally finished my new veil and wimple, just in time. Last year (2016) at The Battle of Wisby/Medeltidsveckan i Visby I found some absolutely lovely handwoven light cream colored silk. I also got to attend an awesome workshop called “Veils, veils, veils! – Veils, wimples and how to wear them” by Elina Sojonen; and finally the layering and construction of veil-wearing started to make sense! It was so windy we almost blew away, but the workshop was great fun: like a Tupperware girl’s night only ogling hoods and veils and wimples! 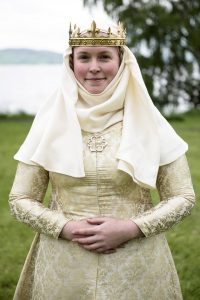 I got to try it out at Hamar Middeladerfestival, and best of all Cathrine had randomly brought her lovely crown and I got to borrow it! It is made by Lorifactor and fit perfectly, although I admit to having a bit of a “princessmark” on my forehead the next day 😉 With the new veil AND a crown I was giggling and jumping around clapping my hands like a six year old at christmas, having way too much fun^^ I attended the festival with Frilansene Compagni d’Norvege, and Stian Green took these photos before I went to go sit with the nobles during the tournament. It’s funny, because this is my tenth year at Hamar with Frilansene, but I never saw a full tournament before I started sitting with the nobles a few years back; I was always off somewhere working in the kitchens or babysitting. I have to say it’s fun to see the tournaments like that, and I feel very lucky. 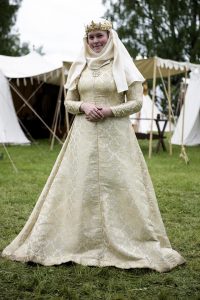 Inspired by the workshop I made the wimple extra long, longer than my old one that always crept up if it was windy. The veil itself is a full circle that I folded in half. I really like that shape, but this is probably the last time I’ll make a circle in silk fabric: sewing the edged was a real hassle and it was really hard on the hands so I had to spread the work out for weeks and weeks. Linen kinda wants to be your friend most of the time, but silk has got way too many opinions of it’s own for my taste. I think I started the edging three times and removed the stitches before I found a half decent way of doing it. In the end I went for a simple double folded edge with white silk thread.  The wimple is about 120cm X 60cm, the veil 120 cm across.

I can see in hindsight that I still have a lot to learn when it comes to balancing the veil. It falls back, exposing more forehead than I would like, even with the crown. I started with basic Pippi Langstrømpe braids, added a linnen band as if I was starring in the next Karate Kid movie and fastened it with a single pin at the back. (Here is where I go wrong, because I never get the band low enough). I pull the braids around so they lie on the sides making small Leia -style earmuffs, fastening them with hairpins; and put a Birgitta hood over the whole thing. Then it’s time for the wimple fastened to overlap nicely with no seams on the top of my head, and then finally it’s veil time!

And I have to add this photo at the end here, because I lost track of time later in the evening and forgot that we were shooting for the next days battle, so I attended it a bit overdressed! No better time has ever presented itself to sing: “She’s beauty, she’s grace, she’ll shoot you in the face” 😉 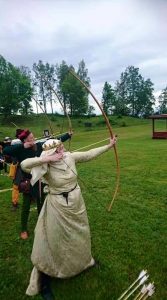